Can I Sue if I Get Sick from Something I Bought at a Supermarket? 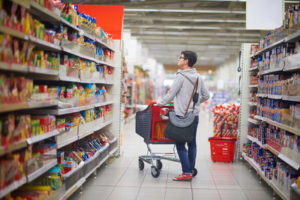 If you get sick from food for any reason that is not your fault, then you may be able to sue. Typically, meat bought in a supermarket is safe and if it has a problem that originated somewhere other than the store, such as the meat packing plant, then usually many people get sick and the suit becomes a class action. That means that everyone in a class, people who got sick from a certain kind of food, sue as a group and the award goes to everyone in the class.

If you got sick from meat that wasn’t stored correctly or was handled improperly there may be a limited number of people who are affected. In addition, if they freeze the food when they get it, they may not get sick for quite some time, or the freezing may kill the bacteria. This means that you may be one of a handful of people affected by the product.

So What Would Be Involved?

The first thing you always do when you believe you have a personal liability case is to write down everything that happened. In this case, the timeline could be critical and what symptoms you had and when. Who else had these symptoms? Did anyone else eat the meat? Did they get sick too?

Was there anything about the meat that could have tipped you off? Did it smell or look funny? Did it have the wrong consistency? What did you cook? The argument will be made that when you cooked it you introduced the bacteria. Perhaps your utensils or the area you prepared the meat on were dirty or otherwise contaminated, Of course the only way you can combat most of these potential arguments is to have a sample of the meat. If you didn’t cook it all, you should still have some.

Hopefully it is in the original packaging if you kept a sample. This will show the sell by date and could indicate if the supermarket is falsely labelling its products. Don’t laugh it has happened and it was discovered. Obviously, the supermarket corrected their mistakes.

This is what you should learn. If you have a food product that you believe is faulty in some way, save it. Also look for the receipt and retain that as well. Record what you prepared and how you prepared it. And call a personal injury attorney.