Legal Importance of a Police Report After a Car Accident 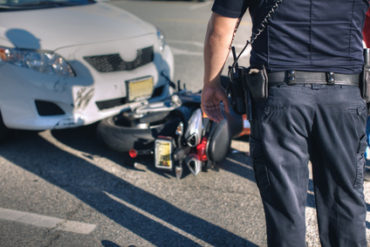 In Brevard Country Florida, tens of thousands of car accidents happen annually. In hundreds of those cases, people are injured. These statistics are based mostly on filed police reports. What is it about police reports that is so important? If someone is doing something illegal, it can result in their punishment. However, that is not all they are good for. Even if no one gets in trouble, those documents provide irrefutable evidence from an objective standpoint of what happened the day of the accident.

Accidents come in all forms, minor fender benders to major, fatal accidents. For some, they think that only the major ones need to be reported. A fender bender or just a scratch doesn’t seem so important to get the police involved. However, even the little ones can make a big difference. There are a wide range of injuries possible from a car accident, from a concussion to a sprained wrist to even a coma or death. Some of these, like a concussion, may not show symptoms right away. This means what seemed like a minor little bump could have big consequences later. These consequences can include brutal hospital bills. If you wind up injured, it can be extremely challenging to seek any compensation.

With a Police Report, You Have Proof

If you have a police report on file while you are working with a personal injury attorney to seek retribution, you have a much better chance of getting a settlement. A police report documents clearly all aspects of the accident, including you and your vehicle’s condition. This provides evidence to support your claims from an unbiased and educated bystander. All of the most important details will be present and documented in a legally binding fashion. These are also details from the scene within minutes of the accident, before there was time for anyone to start changing their stories.

Having a police report on file will also help your lawyer greatly in the case of vehicle damages. What seemed like a fender bender may have knocked something loose in or under your vehicle as well. This may not make an appearance for several days, and by then, without a police report, you cannot prove it was from the accident at all. This can also have a great impact on your insurance, such as a hike in your premiums. Having something to support your claims that the fault of the damage was not your own can save you a lot of money in the long run.

When you are filing a lawsuit, the police report will be closely reviewed by not only the judge, but the insurance companies involved as well. It will help support your side, yes, but it will also come in handy when deciding your settlement as well as how much the other party is expected to use to reimburse you or your insurance company. The report will have crucial information such as where and when the accident took place, statements from all parties involved as well as any witnesses, damages, and injuries. This helps to prevent anyone from retelling the story falsely in order to try and get their way.

Whether you are in a minor scrape or a major accident, be sure to get a police officer on the scene to file a report right away.