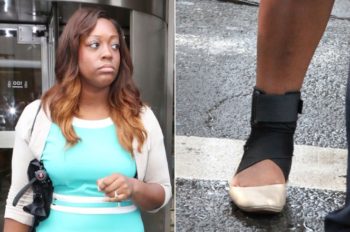 Al Sharpton’s daughter has a large lawsuit pending at $5 million, and has been frivolous about the way that she goes about defending herself and her case. The lawyers are all shaking their heads regarding the case and what Sharpton’s daughter is currently doing to it.

If she has any hope of winning, she is going to have to stop the games.

Not only has she gone out and had fun dancing and shopping while on her broken ankle, that should be healing, but she missed her first court hearing. She needed to be there to speak with them regarding the incident and what might have happened during the day that she was injured by the company.

The lawyers are even throwing out warnings to Al Sharpton and his daughter. They think they could very well lose the case if she continues to go out dancing and running, shopping and having fun on the ankle that is supposed to be injured. Additionally, she should always make sure to show up to her court dates when asked to.

Why She Needs to Just Chill

As with any personal injury lawsuit, it is important that the injured person does not show off how injured they are. This could throw the whole case out the window. Additionally, when the person is a famous one, then it is much easier to see them in action when it comes to taking pictures and catching them doing something they should not be doing. This shows that the person bringing up the lawsuit is not actually in as much pain as they claim in the court room.

Since she is who she is, the court date has been pushed back and new details are going to be emerging in the case. This will help them decide whether or not this is something that she deserves, or if she gets less.

As of right now, we are all waiting to see the outcome of the issues that she brought to the attention of the court, but now has to show up to find out what the judge has to say on the matter, since it is not currently looking good in her favor – which is what she wants it to be. We are worrying about whether or not the judge is going to look at this case in her favor or the favor of the company.